Debate session at the ADVN

Following the meeting of the Scientific Council of NISE on May 13, 2009, a debate session was organised at the ADVN in Antwerp, Belgium, which a.o. the Czech historian Miroslav Hroch attended. Centre point was his model of nation formation. 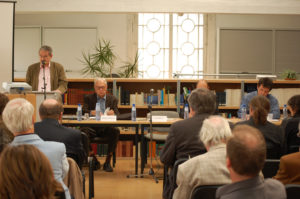 On 13 May 2009, a debate session was organised at the ADVN in Antwerp (Belgium) by NISE, in cooperation with Wetenschappelijke tijdingen (Wt), the scientific journal on the historiography of the Flemish movement. The topic of discussion was the so-called three phase-model by the Czech historian Miroslav Hroch from Charles University in Prague, who previously had attended the meeting of the Scientific Council of NISE. He expanded on his model, which provides a framework to study the evolution of the (‘small’) national movements.
The reason for the debate was the discussion that has been going on in Flanders in general and Wt in particular, on the application of the model to the Flemish case. The issues involved in that particular debate were described by two historians from the University of Ghent, Professor Bruno De Wever and Dr. Antoon Vrints; an interesting discussion ensued, involving several members of the audience.
For the final part of the afternoon, two other members of the NISE Scientific Council talked about their research. The first was Professor James Kennedy from the University of Edinburgh, who a.o. specialises in comparative/historical sociology. He compared the Scottish with the Québec national movement, esp. their liberal characteristics.
The last speaker for the day was Professor Joep Leerssen, chair of Modern European Literature at the University of Amsterdam, who presented his SPIN project (Study Platform for Interlocking Nationalisms) on romantic nationalism (the NISE website contains a link to the project). SPIN has several similarities with NISE, which is why a possible structural cooperation is being examined.